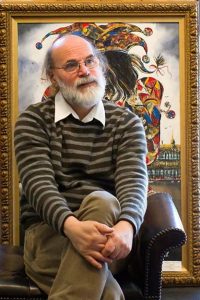 Vladimir Vitkovsky was born in Russian in 1950. He studies at the three prestigious St. Petersburg  Art Schools, learning techniques from various Russian teachers and then breaking away and experimenting on his own. In 1989, when the iron curtain was lifted, Vitkovsky was able to emigrate. He began to show his work in the United States and Europe. Vitkovsky received the first prize at the Boston Copley Association of Artists yearly competition and the Swedish International Art Competition Art Addiction. He has also received several other honorable mentions and diplomas at juried group exhibitions in Europe. The list of his patrons includes the Dupont family and His Eminence Alojzij Matthew Ambrožič Archbishop of Toronto.
While Vitkovsky’s art echoes classical training, he relies more on the wealth of his own human experience. The essence of his work is not confined by any one purely national or cultural context. Vitkovsky emphasizes that his artistic endeavors are not about political or cultural statements, but rather concerned with the artistic process itself. It is his understanding of the past that allows him to question the present. The process itself lets him be “at home in the world” wherever he resides. Vitkovsky creates a unique world of emotional surrealism where the past, present and future are transformed into a heightened sense of “right now.” Vitkovsky currently resides in San Francisco with his wife and his dog Grand Master Jr.
Vitkovsky Fine Art represents one artist but we also do weekend shows for up-and-coming artists.